You are here: Home1 / How it works2 / Delivery ratios

Loads are now reported at the end of the catchment

Versions 1 and 2 of P2R Projector reported loads at the point of generation (edge of paddock). These were based directly on the outputs from paddock modelling simulations (APSIM).

Version 3 reports the load at the end of the catchment. This brings projector outputs into alignment with the Reef 2050 Water Quality Improvement Plan (WQIP) targets and reported modelled load estimates.

Version 3 accounts for losses from the paddock and stream network and losses within the river system to estimate an end-of-catchment load as opposed to an end-of-paddock load.

Losses between the end-of-paddock and the stream are estimated by applying a delivery ratio specific to each catchment, each pollutant and each delivery pathway (surface/sub-surface) from GBR Source. These delivery ratios are derived from calibrating the catchment modelled load to instream monitoring data.

Losses between the stream and the end of catchment are estimated by applying a riverine system delivery ratio, derived from GBR Source. These values are unique to each model functional unit (sub-catchment) and each pollutant.

Typically, for coastal streams, around 90% of the dissolved inorganic nitrogen load is delivered to the end of the catchment. For fine sediment, the riverine system delivery ratios are more variable with less sediment delivered from inland areas. 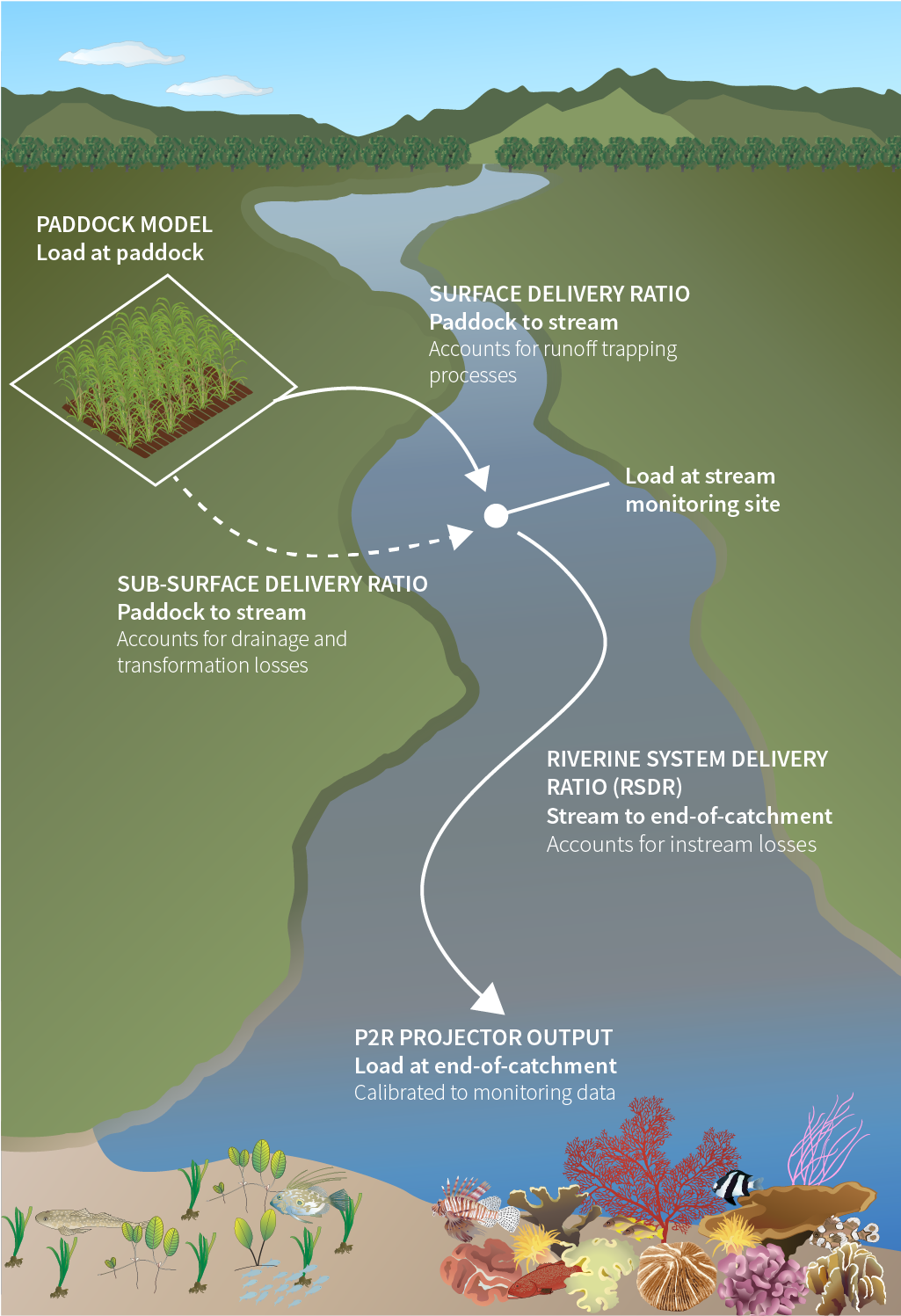 A site in the Wet Tropics loses 5kg of dissolved inorganic nitrogen (DIN) in surface flows and 20kg of DIN in sub surface flows.

The total DIN loss of 25kg from the site is called the end-of-paddock load.

To estimate how much of this load makes it to the stream network, a paddock to stream delivery ratio is applied to the surface load and a different one to the subsurface load.

This means that from the 25kg that were lost from the end-of-paddock, only 11kg makes it to the stream network (load at stream). The rest is lost between the paddock and the stream.

P2R Projector further scales the load at stream by the Riverine System Delivery Ratio (RSDR) to account for losses in the stream network. P2R Projector reports the end-of-catchment load.